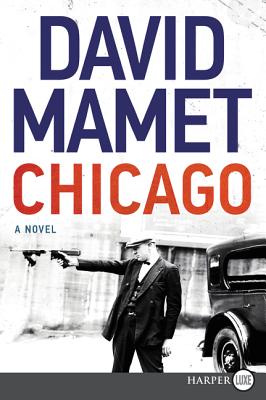 A big-shouldered, big-trouble thriller set in mobbed-up 1920s Chicago—a city where some people knew too much, and where everyone should have known better—by the Oscar-nominated screenwriter of The Untouchables and Pulitzer Prize–winning playwright of Glengarry Glen Ross.

Mike Hodge—veteran of the Great War, big shot of the Chicago Tribune, medium fry—probably shouldn’t have fallen in love with Annie Walsh. Then, again, maybe the man who killed Annie Walsh have known better than to trifle with Mike Hodge.

In Chicago, David Mamet has created a bracing, kaleidoscopic page-turner that roars through the Windy City’s underground on its way to a thunderclap of a conclusion. Here is not only his first novel in more than two decades, but the book he has been building to for his whole career. Mixing some of his most brilliant fictional creations with actual figures of the era, suffused with trademark "Mamet Speak," richness of voice, pace, and brio, and exploring—as no other writer can—questions of honor, deceit, revenge, and devotion, Chicago is that rarest of literary creations: a book that combines spectacular elegance of craft with a kinetic wallop as fierce as the February wind gusting off Lake Michigan.

David Mamet first won recognition with his 1976 plays Sexual Perversity in Chicago and American Buffalo. In 1984, he won the Pulitzer Prize for Glengarry Glen Ross. Among his many other acclaimed and prize-winning plays are Speed the Plow, Oleanna, and The Old Neighborhood. His feature film debut as a writer-director was the classic House of Games; his other films as writer-director include Homicide, The Spanish Prisoner, State and Main, and Spartan. He has also won acclaim for numerous screenplays, including The Verdict, Wag the Dog, The Postman Always Rings Twice, The Untouchables, Hoffa, and The Edge. A Chicago native, he lives in Santa Monica, California.

“All the trademarks of a Mamet production — electric dialogue and a hurtling pace.”
— New York Times

As if Cormac McCarthy had decamped from Southwest to Midwest…Chicago feels like one of the great American male novelists of the late 20th century — Updike, Mailer, Bellow, Roth—trying his hand at writing a genre novel. But unlike those novelists’ somewhat less sure-footed lunges…Mamet lands this with aplomb.
— Los Angeles Times

“Splendid… a riveting crime drama in a throwback journalistic world, a time when you could yell for a copy boy to bring you Dixie cups for your illegal liquor. But this novel has a romantic heart, and the emotional stakes complement the whiskey-drenched whodunit.”
— USA Today

“Chicago is tremendous fun, with much to savour.”
— The Times Literary Supplement

“The story moves at a careening pace… Of a piece with character studies such as E.L. Doctorow’s Ragtime and John Sayles’ Eight Men Out, Mamet’s book does Chicago—and organized crime—proud. An evocative, impressive return that Mamet fans will welcome.”
— Kirkus Reviews (starred review)

“Full of twists and surprises…Mamet’s new novel is a treasure, a piece of fictitious history entrenched in an era of violence and love.”
— Harvard Crimson

“The finest American writer of his generation.”
— Sunday Mail