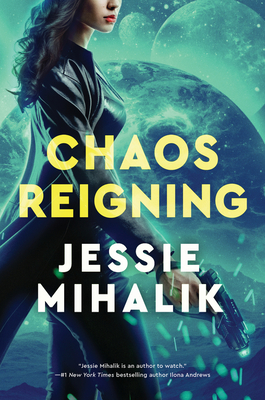 This is book number 3 in the The Consortium Rebellion series.

Chaos Reigning is a steamy and action filled romance starring another truly kick-ass space princess. Battles come to a head, and more than one secret is revealed in the finale of The Consortium Rebellion Trilogy. Chaos follows Caterina, the youngest of the von Hasenberg siblings. Cat knows she is strong, in more ways than one, but it is a strength she has kept closely guarded for most of her life for fear of it being used against those she loves. She has spent her public life building a reputation as a shallow society girl. Most of the time she is happy to step into that role. When Cat orchestrates an invitation to a party at the estate of a rival family, her sister Bianca hires the mysterious but obviously handsome Alexander Sterling to be her bodyguard. Accompanied by Alex as well as his adopted sister Aoife, Cat charms the crowds by day while searching for evidence of betrayal at night. However, when the traitors reveal themselves and inter-space communications and travel are shut down, Cat, her former bodyguards, and a few friends are all that’s keeping the Consortium from becoming a brutal dictatorship. Chaos Reigning is a thrilling conclusion to the Consortium Rebellion Trilogy. Jessie Mihalik has crafted some of the most exciting and brilliant heroines I have read in years, perfect for fans of Sarah J. Maas and Tamora Pierce. The von Hasenberg sisters are an incredibly strong group of women, confident in their own intelligence and abilities, and working to make the next generation of leaders kinder and more just than the ones that came before.

Interplanetary intrigue and romance combine in this electrifying finale to the Consortium Rebellion series.

As the youngest member of her High House, Catarina von Hasenberg is used to being underestimated, but her youth and flighty, bubbly personality mask a clever mind and stubborn determination. Her enemies, blind to her true strength, do not suspect that Cat is a spy—which makes her the perfect candidate to go undercover at a rival House’s summer retreat to gather intelligence on their recent treachery.

Cat’s overprotective older sister reluctantly agrees, but on one condition: Cat cannot go alone. Alexander Sterling, a quiet, gorgeous bodyguard, will accompany her, posing as her lover. After Cat tries, and fails, to ditch Alex, she grudgingly agrees, confident in her ability to manage him. After all, she’s never found a person she can’t manipulate.

But Alex proves more difficult—and more desirable—than Cat anticipated. When she’s attacked and nearly killed, she and Alex are forced to work together to figure out how deep the treason goes. With rumors of widespread assaults on Serenity raging, communications down, and the rest of her family trapped off-planet, Catarina must persuade Alex to return to Earth to expose the truth and finish this deadly battle once and for all.

But Cat can’t explain why she’s the perfect person to infiltrate hostile territory without revealing secrets she’d rather keep buried. . . .

Jessie Mihalik has a degree in computer science and a love of all things geeky. A software engineer by trade, Jessie now writes full time from her home in Texas. When she’s not writing, she can be found playing co-op video games with her husband, trying out new board games, or reading books pulled from her overflowing bookshelves. Polaris Rising is her debut novel.

“POLARIS RISING is space opera at its best, intense and addictive, a story of honor, courage, betrayal, and love. Jessie Mihalik is  an author to watch.” — Ilona Andrews, #1 New York Times bestelling author, on Polaris Rising