On This Unworthy Scaffold (Paperback) 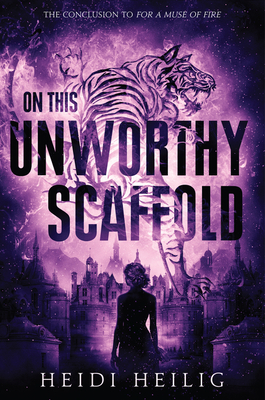 Jetta is in the center of a war. With her magical power, she could save everyone, save her country . . . or she could destroy it all.

The final book in the acclaimed Shadow Players trilogy.

Jetta’s home is spiraling into civil war. Le Trépas—the deadly necromancer—has used his blood magic to wrest control of the country, and Jetta has been without treatment for her malheur for weeks. Meanwhile, Jetta’s love interest, brother, and friends are intent on infiltrating the palace to stop the Boy King and find Le Trépas to put an end to the unleashed chaos.

The sweeping conclusion to Heidi Heilig’s ambitious trilogy takes us to new continents, introduces us to new gods, flings us into the middle of palace riots and political intrigue, and asks searching questions about power and corruption.

Acclaimed author Heidi Heilig creates a rich world inspired by Southeast Asian cultures and French colonialism. Told from Jetta’s first-person point-of-view, as well as with chapters written as play scripts and with ephemera such as songs, myths, and various forms of communication, On This Unworthy Scaffold is a satisfying finale to the epic fantasy trilogy. It will thrill readers who love Claire Legrand’s Furyborn, Laini Taylor’s Strange the Dreamer, and N. K. Jemisin’s The Fifth Season.

For a Muse of Fire. Her debut novel, The Girl from Everywhere, was an Indie Next Pick and was also named a Best Book of the Year by NPR. Heidi Heilig holds an MFA from New York University in musical theatre writing, and she’s written the book and lyrics for several shows. She lives in Brooklyn, New York, with her family. www.heidiheilig.com