Imperium Restored: A Novel of the Praxis (Paperback) 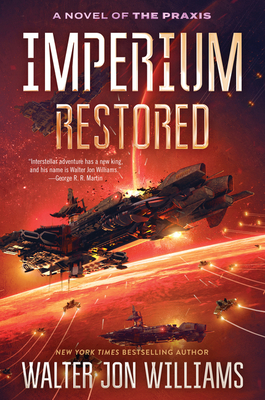 “Interstellar adventure has a new king, and his name is Walter Jon Williams.” —George R.R. Martin

Blending fast-paced military science fiction and space opera, the third and final volume in a dynamic trilogy from the New York Times bestselling author of The Praxis, set in the universe of his popular and critically acclaimed Dread Empire’s Fall series, comes a tale of blood, courage, adventure, and battle in which the fate of an empire rests in the hands of two lovers.

Star-crossed lovers Gareth Martinez and Caroline Sula have decisively beaten the forces of the corrupt Zanshaa government. It seems all there’s left to do is to travel to the capital of Zanshaa to reunite the empire under the banner of the Restoration. Before they can sweep up the pieces, though, it’s revealed that any advance would spring an enemy trap. To make things worse, their opponents have more resources than Martinez and Sula could have imagined, and a superior force is now aimed at the heart of the Restoration.

But before Martinez and Sula can contend with the gathering enemy forces, a surprising act of violence on Sula’s part threatens their relationship—and damages their trust. Hurt and confused, Martinez sends Sula into exile while he tries to recover from his broken heart. Somehow, these two lovers must repair their relationship in order to defeat this new enemy threat... especially when more than love is at stake.

Walter Jon Williams is a New York Times bestselling author who has been nominated repeatedly for every major sci-fi award, including Hugo and Nebula Awards nominations for his novel City on Fire. He is the author of Hardwired, Aristoi, Implied Spaces, and Quillifer. Williams lives near Albuquerque, New Mexico, with his wife, Kathleen Hedges.

“Walter Jon Williams is one of my favorite writers in the genre, with great ideas, worldbuilding, characters, and always a captivating story.” — Kevin J. Anderson, New York Times bestselling author

"Newcomers will have no problem getting oriented in this rip-roaring sci-fi world, and returning readers will be thrilled to dive back in." — Publishers Weekly (starred review) on Fleet Elements

“With a pace that is faster than light….Fleet Elements is a space opera book that doesn’t disappoint…full of gung-ho rebels trying to save themselves, with a side of power hungry aliens, and some witty banter.” — Nerd Daily

“Williams is consummate writer. His worldbuilding continues excellent, his characterization is solid and believable, and his attention to detail while juggling a complex story of intrigue and financial disaster is deeply, impressive. Well-paced, tense, and deeply compelling, The Accidental War is a very entertaining work.”
— Tor.com