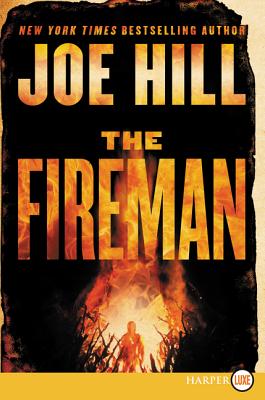 “Original and gripping, a page-turner.”
— George R. R. Martin on THE FIREMAN

“[A] superb supernatural thriller . . . a tremendous, heartrending epic of bravery and love set in a fully realized and terrifying apocalyptic world, where hope lies in the simplest of gestures and the fullest of hearts.”
— Publishers Weekly (starred review) on THE FIRMAN

“Hill has a talent for depicting fascinating characters caught in terrible situations. . . . With a full cast of characters and multiple story lines to keep the reader hooked, Hill’s enthralling fourth thriller hits another home run.”
— Library Journal (starred review) on THE FIREMAN

“Joe Hill has always been good, but he’s created something incandescent here, soaring and original. He’s a master storyteller who writes with fire in his veins.”
— Lauren Beukes, author of BROKEN MONSTERS on THE FIREMAN

“Fascinating and utterly engaging, this novel is sure to leave readers wanting more. One thing is for certain, however. After reading this book, readers will never hear Christmas carols in quite the same way again.”
— Library Journal (starred review) on NOS4A2

[Hill]’s got horror down pat, and his debut is hair-raising fun.”
— Kirkus on HEART-SHAPED BOX

“[A] wrenching and effective ghost story . . . reads like good, early King mixed with some of the edgier splatterpunk sensibilities of David J. Schow . . . [HEART-SHAPED BOX] has genuinely touching emotional moments as well as action-packed confrontations with the dead.”
— Library Journal (starred review) on HEART-SHAPED BOX

“A genuinely scary novel filled with people you care about; the kind of book that still stays in your mind after you’ve turned over the final page. I loved it unreservedly.”
— Neil Gaiman, author of THE OCEAN AT THE END OF THE LANE on HEART-SHAPED BOX

“[HORNS is] a creepy murder mystery, a tragic love triangle, and a sweetly wistful coming-of-age story. It’s the kind of book that has you laughing on one page, crying on another and making sure the doors and windows are safely locked on a third.”
— Miami Herald on HORNS

“[Horns is] devilishly good. . . . Hill is a terrific writer with a great imagination. He has a special talent for taking us and his characters to very weird places.”
— USA Today on HORNS