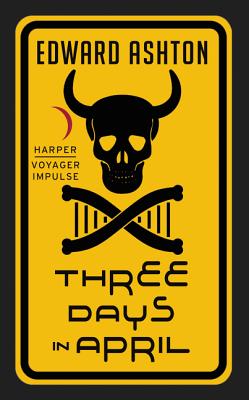 Anders Jensen is having a bad month. His roommate is a data thief, his girlfriend picks fights in bars, and his best friend is a cyborg…and a lousy tipper. When everything is spiraling out of control, though, maybe those are exactly the kind of friends you need.

In a world divided between the genetically engineered elite and the unmodified masses, Anders is an anomaly: engineered, but still broke and living next to a crack house. All he wants is to land a tenure-track faculty position, and maybe meet someone who’s not technically a criminal-but when a nightmare plague rips through Hagerstown, Anders finds himself dodging kinetic energy weapons and government assassins as Baltimore slips into chaos. His friends aren’t as helpless as they seem, though, and his girlfriend’s street-magician brother-in-law might be a pretentious hipster - or might hold the secret to saving them all.

Frenetic and audacious, Three Days in April is a speculative thriller that raises an important question: once humanity goes down the rabbit hole, can we ever find our way back?

Edward Ashton lives with his adorably mopey dog, his inordinately patient wife, and three beautiful but terrifying daughters in Rochester, New York, where he studies new cancer therapies by day, and writes about the awful things his research may lead to by night. His short fiction has appeared in dozens of venues, ranging from Louisiana Literature to Daily Science Fiction. Three Days in April is his first novel.