In the Shadow of the Gods: A Bound Gods Novel (Paperback) 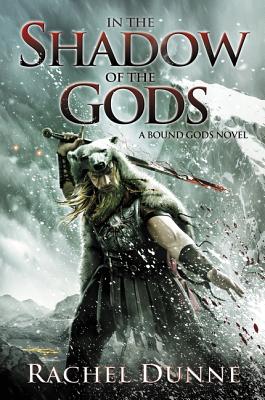 This is book number 1 in the Bound Gods series.

With In the Shadow of the Gods, Rachel Dunne makes her breathtaking debut with this first book in a dark epic fantasy trilogy, The Bound Gods, in which a mismatched band of mortals led by a violent, secretive man must stand against a pair of resentful gods to save their world.

Eons ago, a pair of gods known as the Twins grew powerful in the world of Fiatera, until the Divine Mother and Almighty Father exiled them, binding them deep in the earth. But the price of keeping the fire lands safe is steep. To prevent these young gods from rising again, all twins in the land must be killed at birth, a safeguard that has worked until now.

Trapped for centuries, the Twins are gathering their latent powers to break free and destroy the Parents for their tyranny—to set off a fight between two generations of gods for control of the world and the mortals who dwell in it.

When the gods make war, only one side can be victorious. Joros, a mysterious and cunning priest, has devised a dangerous plan to win. Over eight years, he gathers a team of disparate fighters—Scal, a lost and damaged swordsman from the North; Vatri, a scarred priestess who claims to see the future in her fires; Anddyr, a drug-addled mage wandering between sanity and madness; and Rora and Aro, a pair of twins who have secretly survived beyond the reach of the law.

These warriors must learn to stand together against the unfathomable power of vengeful gods, to stop them from tearing down the sun . . . and plunging their world into darkness.

Living in the cold reaches of the upper Midwest with her beast of a dog, Rachel Dunne has developed a great fondness for indoor activities. Her first novel, In the Shadow of the Gods, was a semifinalist for the 2014 Amazon Breakthrough Novel Award before being picked up for publishing. For as long as snow continues falling in Wisconsin, Rachel promises to keep writing.

“Dunne’s debut novel is visceral grimdark fantasy with ruthless religions, deeply conflicted characters, and a bleak, hostile setting. This trilogy is off to a gritty, gutsy start.” — Beth Cato, author of The Clockwork Dagger, on IN THE SHADOW OF THE GODS

“The gods have brought this group together - but which gods, and to what purpose? The interesting concept will keep readers involved as the story gradually unfolds. Dunne’s polished prose and well-rounded characters make it a strong start.” — Publishers Weekly on IN THE SHADOW OF THE GODS

“The gritty mythos and conflicted characters are compelling enough to bring the reader along to the last page...and to the coming sequel. Antiheroes carry the day...in this dark tale of pragmatism and survival.” — Kirkus Reviews on IN THE SHADOW OF THE GODS

“Joros is an interesting character, full of suprises to both readers and to those around him, and able to draw others to himself while maintaining some mystery. This novel is full of battles and blood, but never loses the heart of the story amidst the chaos.” — RT Magazine (4 stars) on IN THE SHADOW OF THE GODS

“The compelling characters coupled with the dark mythology that balances fresh and evocative all wrapped up in immersive prose amounts to a debut novel that I found quite impressive. In fact, the novel feels more polished and with a more mature voice than most debuts often have.” — SFFWorld