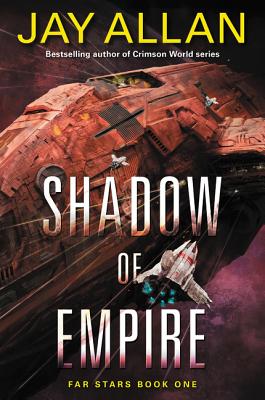 This is book number 1 in the Far Stars series.

The first installment in the Far Star series, a swashbuckling space saga that introduces the daring pirate Blackhawk and the loyal crew of the Wolf’s Claw, from Jay Allan, the author of the bestselling Crimson Worlds saga.

Smuggler and mercenary Arkarin Blackhawk and the crew of the ship Wolf’s Claw are freelance adventurers who live on the fringe of human society in the Far Stars. A veteran fighter as deadly with a blade as he is with a gun, Blackhawk is a man haunted by a dark past. Even his cynicism cannot banish the guilt and pain that threaten his sanity.

Sent to rescue the kidnapped daughter of his longtime friend Marshal Augustin Lucerne, Blackhawk and his crew find themselves drawn into one deadly fight after another. When the Wolf’s Claw is damaged, they are forced to land on a remote planet subsumed by civil war. Pulled unwittingly into the conflict, they uncover disturbing information about secret imperial involvement that could upset the plans of Lucerne.

For the Marshal is determined to forge a Far Stars Confederation powerful enough to eliminate all imperial influence and threats in the sector. He needs a skilled warrior like Blackhawk on his side, but the mercenary, plagued by dark memories from the past, refuses to join the cause. All too soon, though, he and his crew will have to take a stand.

Jay Allan is a former investor and the author of the Crimson Worlds series and the first two books in the Far Stars series, Shadow of Empire and Enemy in the Dark. When not writing, he enjoys traveling, running, hiking, and reading. He loves hearing from readers and always answers e-mails. He currently lives in New York City.

“Readers who seek the visceral, swashbuckling adventures of muscular, troubled heroes and gorgeous, headstrong heroines will enjoy this series launch about the wild backwater planets of the Far Stars...This old-fashioned tale is a paean to the simple pleasures of exceedingly masculine adventures.”
— Publishers Weekly on SHADOW OF EMPIRE

“Shadow of Empire is a crazy, over-the-top, zany adventure in which rogues outwit space pirates, get caught up in a civil war, and have space fights in and around an asteroid field.”
— Charlie Jane Anders, iO9 on SHADOW OF EMPIRE

“It’s twisty and turny, with a lot of effective world-building, but Jay Allan pulls off another neat trick: as much time as is spent on galactic power politics, we experience wall-to-wall swashbuckling adventure.”
— B&N Sci-fi & Fantasy Blog