All Involved: A Novel (Paperback) 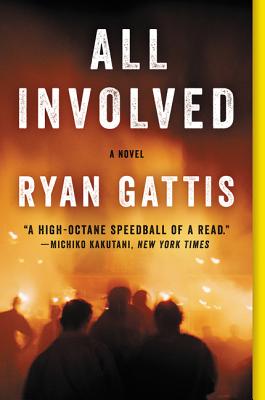 A propulsive and ambitious novel as electrifying as The Wire, from a writer hailed as the West Coast's Richard Price—a mesmerizing epic of crime and opportunity, race, revenge, and loyalty, set in the chaotic streets of South Central L.A. in the wake of one of the most notorious and incendiary trials of the 1990s

At 3:15 p.m. on April 29, 1992, a jury acquitted three white Los Angeles Police Department officers charged with using excessive force to subdue a black man named Rodney King, and failed to reach a verdict on the same charges involving a fourth officer. Less than two hours later, the city exploded in violence that lasted six days. In nearly 121 hours, fifty-three lives were lost. But there were even more deaths unaccounted for: violence that occurred outside of active rioting sites by those who used the chaos to viciously settle old scores.

A gritty and cinematic work of fiction, All Involved vividly re-creates this turbulent and terrifying time, set in a sliver of Los Angeles largely ignored by the media during the riots. Ryan Gattis tells seventeen interconnected first-person narratives that paint a portrait of modern America itself—laying bare our history, our prejudices, and our complexities. With characters that capture the voices of gang members, firefighters, graffiti kids, and nurses caught up in these extraordinary circumstances, All Involved is a literary tour de force that catapults this edgy writer into the ranks of such legendary talents as Dennis Lehane and George V. Higgins.

Ryan Gattis is a writer and educator. His latest work, All Involved, is grounded in nearly two and a half years of research and background spent with former Latino gang members, firefighters, and other L.A. citizens who lived through the 1992 riots. Gattis lives in Los Angeles, where he is a member of the street art crew UGLARworks.

“ALL INVOLVED is a symphonic, pitch-perfect, superlative novel. It is visceral and adrenalin-fuelled, yet tender and even darkly comic. It is audacious, unflinching and subversive. It doesn’t judge. It swallowed me whole.”
— David Mitchell, author of Cloud Atlas

“A heartbreaking portrait of a city tearing itself apart.”
— Paula Hawkins, author of The Girl on the Train

“Corrosive, timely, vividly realized scenes of urban warfare and thwarted dreams by a writer who clearly knows his subject: the netherworld of Los Angeles in the early 1990’s.”
— Joyce Carol Oates

“All Involved is a monumental achievement. Ryan Gattis takes the reader into the broken, outraged heart of Los Angeles during the ‘92 riots and doesn’t blink once at what he finds there.”
— Dennis Lehane

“It’s a propulsive, sun-baked, blood-soaked read that captures one of the most turbulent times in recent Los Angeles history. It’s all the more remarkable an achievement considering Gattis...was barely in high school, in Colorado, at the time three LAPD officers who assaulted King were acquitted.”
— Interview Magazine

“In the end, this isn’t a story about the events of the L.A. riots...it’s about the city and its ability to rise from the ashes...Like the historical events it’s based on, this page-turner is horrific, heartrending, and-maybe-just a bit hopeful.”
— Publishers Weekly

“An overwhelming and fully immersive performance from Gattis, who finds the humanity and poetry in the most inhumane of circumstances. A solid addition to all fiction collections, though not for the fainthearted.”
— Library Journal