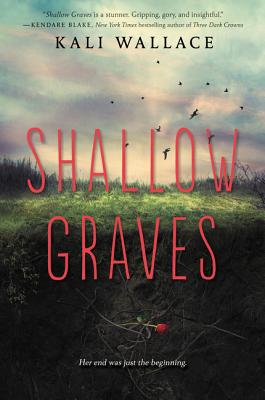 Local author Kali joins teen horror subgenre authors like Gretchen McNeal, Kendare Blake, and Dan Wells with this strong debut. 17-year-old Breezy discovers a world of monsters when she awakens in her grave a year after her murder, with no clear memories of her own death, but the power to sense darkness in others – specifically those who have killed with intent – and mete out a vigilante justice of her own. Breezy has no interest in existing as a monster; she longs for a return to her time with her parents, sisters, and best girlfriend. Her search for information and assistance takes her down many a dark byway, as she encounters more monsters among both the human and non-human populace. Breezy’s struggle to define the terms of her unlife makes for a rewarding read, and there are some truly scary monsters to boot.

For fans of Holly Black and Nova Ren Suma, a gripping, hauntingly atmospheric novel about murder, revenge, and a world where monsters—human and otherwise—lurk at the fringes. “Shallow Graves is a stunner. Gripping, gory, and insightful” (Kendare Blake, New York Times bestselling author of Three Dark Crowns).

When seventeen-year-old Breezy Lin wakes up in a shallow grave one year after her death, she doesn’t remember who killed her or why. All she knows is that she’s somehow conscious—and not only that, she’s able to sense who around her is hiding a murderous past. In life, Breezy was always drawn to the elegance of the universe and the mystery of the stars. Now she must set out to discover whatever is to become of her in the gritty, dangerous world to which she now belongs—where killers hide in plain sight, and a sinister cult is hunting for strange creatures like her.

What she finds is at once empowering, redemptive, and dangerous.

Kali Wallace is the author of two novels for teens and many short stories. She studied geology for years but now devotes her time to writing. She lives in Southern California. You can find her at www.kaliwallace.com.

“Kali Wallace has created a world that’s both natural and unsettling …and reminds us with Breezy’s story that true terror is not a monster, but what lurks in the dark corners of human nature.” — Madeleine Roux, New York Times bestselling author of the Asylum series.

“Shallow Graves is a stunner. Gripping, gory, and insightful.” — Kendare Blake, author of Anna Dressed in Blood and Antigoddess

“A fast-paced ride through a dark, imaginative world.” — Mindy McGinnis, author of Not a Drop to Drink and A Madness So Discreet

“A phenomenally written, spine-chilling story...sure to keep you up all night.” — Kimberly Derting, author of the Body Finder series

“Writing in Breezy’s pragmatic and engaging voice, Wallace weaves an unsettling tale that explores Breezy’s strange existence, while also thoughtfully examining a life cut short...her struggle to reconcile what she has become with the human she used to be forms the heart of this bittersweet story.” — Publishers Weekly