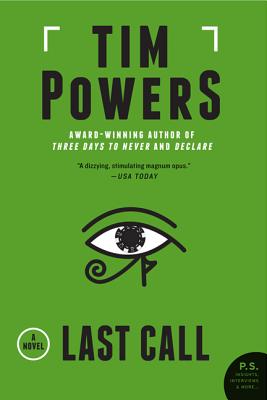 In Last Call, the Locus Fantasy Award and World Fantasy Award winner by Tim Powers, ex-professional gambler Scott Crane hasn't returned to Las Vegas, or held a hand of cards, in ten years. But nightmares about a strange poker game he once attended—a contest he believed he walked away from a big winner—are drawing him back to the magical city.. because the mythic game did not end that night in 1969. And the price of his winnings was his soul.

This edition of Last Call includes a special P.S. section with additional insights from the author, background material, suggestions for further reading, and more.

“There’s never been a novel quite like DECLARE…one of the protean Powers’s most absorbing and rewarding creations.”
— Kirkus Starred Review

“Highly ingenious . . . No one else writes like Powers, and Declare finds him at the top of his game.”
— San Francisco Chronicle

“DECLARE is classic Tim Powers, his best novel since Last Call, and possibly his best to date.”
— Locus Magazine