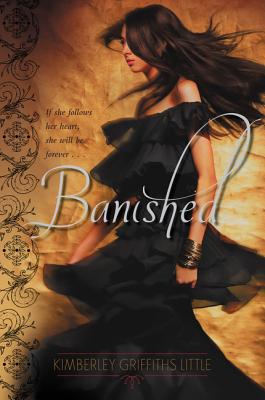 This is book number 2 in the Forbidden series.

Perfect for fans of Cleopatra’s Moon and the adult bestseller The Red Tent, this is the sequel to Forbidden, set in the unforgiving deserts of Ancient Mesopotamia. Jayden’s courage will be put to the test as she fights for her survival and the one she loves.

Jayden thought she had lost everything. After months of traveling in the desert, she discovers her beloved Kadesh is injured but still alive. However, the two must flee immediately, for the vengeful and jealous Horeb is on their trail, desperate to take Jayden back to be his bride.

The trek to the Southern Lands comes with heartache and danger, and as Jayden and Kadesh draw closer their destination, she realizes that even he has been keeping secrets from her…ones that will change everything.

Kimberley Griffiths Little’s riveting sequel to Forbidden will leave readers begging for Returned, the final installment in this epic trilogy.

Kimberley Griffiths Little was born in San Francisco, but now lives in New Mexico with her husband and their three sons. For such award-winning middle grade novels as When the Butterflies Came, The Last Snake Runner, The Healing Spell, and Circle of Secrets, her writing has been praised as "fast-paced and dramatic," with "characters painted in memorable detail" and "beautifully realized settings." Kimberley adores anything old and musty with a secret story to tell. She's stayed in the haunted tower room at Borthwick Castle in Scotland; sailed on the Seine in Paris; ridden a camel in Petra, Jordan; shopped the Grand Bazaar in Istanbul; and spent the night in an old Communist hotel in Bulgaria.

“Will leave readers eagerly anticipating the next installment. Banished will appeal to fans of Kristin Cashore and Morgan Rhodes.” — Voice of Youth Advocates (VOYA)

“Little’s descriptions of the landscape are evocative in both desolation and in beauty. Just as good is her pacing, which gets the blood pumping for both characters and readers. This will heighten anticipation for a no-doubt exciting conclusion.” — Booklist

“At its core, this is a romance, with all the push and pull that goes along with impossible love, and Little elevates the story by creating a perilous landscape, both outward and inward, as Jayden must deal with the hardship of desert life as well as her own desires.” — Booklist (starred review)

“A fast-paced, entertaining choice which will appeal to fans of historical fiction and romance.” — School Library Journal

“Rich historical details are deftly woven into Jayden’s narration, and the dynamics of Jayden’s tribe are vividly drawn. Jayden’s story becomes as much about finding herself as it is about finding love.” — Bulletin of the Center for Children’s Books