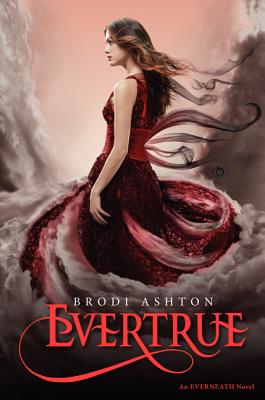 This is book number 3 in the Everneath series.

“This is Twilight for mythology lovers, with elements of the stories of both Persephone and Orpheus and Eurydice. Seventeen-year-old Nikki Beckett, who's just returned from a century -- equivalent to six months of Earth time -- in the underworld of Everneath, finds out she has a mere six more months before being taken back to the underworld -- this time for good. A captivating story of love, loss, and immortality.”
— Melissa Oates, Fiction Addiction, Greenville, SC

Inspired by the Persephone myth, this stunning conclusion to the Everneath trilogy, whose captivating first book earned a VOYA Perfect Ten of 2011 and a Whitney award, explores the resiliency of the human spirit and the indomitable power of true love. Perfect for fans of Fallen and Beautiful Creatures!

Now that Nikki has rescued Jack, all she wants is to be with him and graduate high school. But after being tricked by Cole, she's begun the process of turning into an Everliving herself . . . which means she must feed on a Forfeit soon—or die. Nikki and Jack begin a desperate attempt to reverse the process, using everything they can think of. Even Cole, who they expected to fight them at every turn, has become an unlikely ally—but for how long? Nikki needs to feed on Cole to survive, Cole needs Nikki to gain the throne in the Everneath, Jack needs Nikki because she is everything to him—and, together, they must travel back to the underworld to undo Nikki's fate and make her mortal once more.

Will Nikki be forced to spend eternity in the underworld—or does she have what it takes to bring down the Everneath once and for all?

BRODI ASHTON is the author of Everneath, a VOYA Perfect 10 for 2011; Everbound; and Evertrue; and the coauthor, with Cynthia Hand and Jodi Meadows, of My Lady Jane. She received a bachelor’s degree in journalism from the University of Utah and a master’s degree in international relations from the London School of Economics. Brodi lives in Utah with her family. You can visit her online at www.brodiashton.blogspot.com

“Fans of the series will not be disappointed”
— Booklist

“Will break some hearts.”
— Kirkus Reviews

Praise for EVERNEATH: “I was pulled under by this bittersweet, beautiful retelling of the Persephone myth. Ashton’s lovely storytelling and strong-on-her-own-terms main character set this one apart. Wonderful!”
— Ally Condie, bestselling author of MATCHED and CROSSED

Praise for EVERNEATH: “Ashton’s debut is complex and intriguing. Drawing inspiration from such myths as Osiris, Orpheus, and Persephone, it explores the nature of loss and longing and what it means to be alive.”
— Publishers Weekly

Praise for EVERNEATH: “The author brings a fresh, innovative concept to young adult fiction with well-developed characters and a fantastic plot line .... Libraries are advised to buy multiple copies-this one will fly off the shelves.”
— Voice of Youth Advocates (VOYA) (starred review)