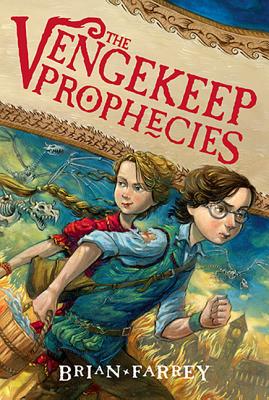 This is book number 1 in the Vengekeep Prophecies series.

Forget what you know about prophecies—this epic middle-grade fantasy about a clumsy boy born into a family of thieves is fresh, fun, and anything but predictable! The first in an unforgettable trilogy, this Kirkus Reviews Best Children's Book of the Year takes everything you thought you knew about fantasy and spins it into pure magic.

Jaxter Grimjinx is a born thief. At least, he's supposed to be. For generations, the Grimjinx clan has produced the swiftest, cleverest thieves in Vengekeep. The problem is, Jaxter is clumsy. So clumsy that in his first solo heist, he sets the Castellan's house on fire and lands his family in prison. Even Jaxter's talent for breaking magical locks can't get them out of this bind.

Then a suspiciously convenient prophecy emerges, naming the Grimjinx clan as the soon-to-be heroes of Vengekeep. It's good enough to get his family out of jail, but when the doomsday prophecy starts to come true, Jaxter is pretty sure a life behind bars would be a better fate. Now, with the help of his new friend, Callie, Jaxter will have to face down flaming monsters, a bazaar of thieves, and a renegade sorcerer to become the hero he was truly born to be.

Full of twists and turns, friendship and adventure, The Vengekeep Prophecies is a "rich fantasy that hits the ground running and never lets up" (Publishers Weekly, starred review).

Brian Farrey acquires young adult fiction for Flux. He and he alone has the power to make you an honorary Grimjinx. (You know you want it.) He lives in St. Paul, Minnesota.

Brett Helquist's celebrated art has graced books from the charming Bedtime for Bear, which he also wrote, to the New York Times–bestselling A Series of Unfortunate Events by Lemony Snicket to the glorious picture book adaptation of Charles Dickens's A Christmas Carol. He lives with his family in Brooklyn, New York.

“In an excellent, self-contained adventure, 12-year-old Jaxter Grimjinx is anxious to prove himself at the family business: thievery. Farrey’s rich fantasy hits the ground running and never lets up.” — Publishers Weekly (starred review)

“There couldn’t be a more likeable family of thieves. This funny and serious series opener features action, twists and pleasingly original vocabulary, such as the swear ‘zoc’ (as in ‘Zoc that’) and the expression ‘bangers,’ which means, roughly, ‘awesome.’ Bangers!” — Kirkus Reviews

“Rollicking. Highly accessible. Jaxter is as heroic as the early Harry [Potter], but he has a loving family, which makes a big difference in his ability to trust his own instincts as he works for the community’s greater good. Readers will hope for a continuation of the story.” — ALA Booklist

"With the deftness and ingenuity of a master thief, Brian Farrey spins the tale of a boy who is tasked with the unenviable job of defeating fate. Enticing, lively, and wholly engrossing, this book takes us on a journey as twisty and treacherous as an old castle staircase--where danger lurks behind every bend, nothing is ever as it seems, and things can always, always get worse. A book readers will devour in one sitting--and then immediately long for the sequel so they can be absorbed in this world again." — Anne Ursu, acclaimed author of The Real Boy and The Lost Girl

“Humorous and inventive. I’m eager to read the second in the trilogy!” — Joseph Delaney, bestselling author of The Last Apprentice series

“A charming story that’s at times laugh-out-loud funny but also a satisfying fantasy, offering a magical world that will strike a chord with fans of the Harry Potter series.” — Bulletin of the Center for Children’s Books