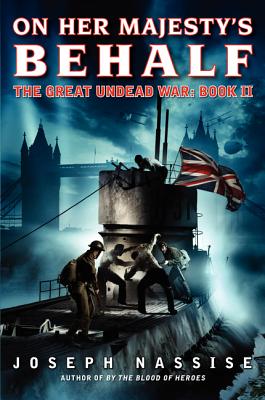 This is book number 2 in the The Great Undead War series.

The outrageously inventive follow-up to By the Blood of Heroes—Inglourious Basterds meets Dawn of the Dead in this steampunk alternate history World War I zombie novel.

At the close of 1917, the Germans introduced a new type of gas, T-Leiche—“corpse gas”—a revolutionary weapon that changed the war. Instead of killing the living, T-Leiche resurrected the bodies of the dead.

Though they survived the killing fields of France, the danger has only just begun for veteran Captain Michael "Madman" Burke and company. They've just been assigned a new mission: rescue Princess Veronica, the sole surviving member of the British royal family. But Kaiser Manfred Von Richthofen, the undead Red Baron and new leader of Germany, is determined to find Veronica as well.

In the devastated, zombie-infested city of London, Burke and his men will face off in an unholy battle with their most formidable opponent yet: a team led by none other than his infected former right-hand man, Sergeant Moore. If they don't succeed, all of Britain will fall into undead Central hands.

Joseph Nassise is the author of more than twenty novels, including the internationally bestselling Templar Chronicles series, the Jeremiah Hunt series, and several books in the Rogue Angel action/adventure series from Gold Eagle. He’s a former president of the Horror Writers Association, the world’s largest organization of professional horror writers, and a multiple Bram Stoker Award and International Horror Guild Award nominee.

“Joseph Nassise’s apparently boundless imagination and thoroughly engaging storytelling make even the most unlikely of stories compelling. ... Intensely absorbing and suspenseful. ... it all adds up to a story that won’t be easy to put down or forget.” — RT Book Reviews (top pick)

“I would argue Joseph Nassise is the most important thing to happen to zombies since Max Brooks, and that’s no hyperbole. He’s really that good.” — Joe McKinney, author of Dead City and Flesh Easters

“Heretic keep[s] us off-guard and entertained with its every surprising move.” — Peter Straub on Heretic

“First-rate, stylish work from Mr. Nassise, with a steady escalation of the story’s speed that makes it almost literally breath-taking.” — Clive Barker on Heretic

“BY THE BLOOD OF HEROES is a genre-twisting madhouse of horror, Steampunk SF and zombie madness that is too damn much fun to miss! Buckle up...this is a wild ride!” — Jonathan Maberry, New York Times Bestseller of Rot & Ruin and Flesh & Bone

“A breakneck-paced thriller that delivers on the thrills and tosses in more than a few chills.” — Kelley Armstrong on Heretic

“Urban fantasy and sf author Nassise­ (Eyes To See) raises the alternate history genre to brilliant new heights. This is a treat for zombie and horror fans, military fiction aficionados, history buffs, and steampunk lovers alike, all of whom will be clamoring for the next installment.” — Library Journal