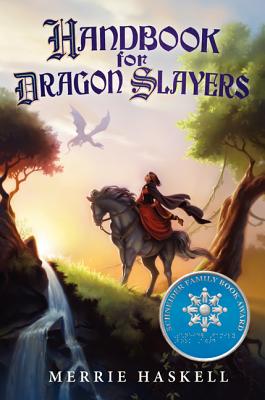 Political upheaval sends Princess Tilda fleeing from her kingdom in the company of two hopeful dragon slayers. The princess never had any interest in chasing dragons. The pain from her crippled foot was too great, and her dream was to write a book. But the princess finds herself making friends with magical horses, facing the Wild Hunt, and pointing a sword at fire-breathing dragons. While doing things she never imagined, Tilda finds qualities in herself she never knew she possessed.

Handbook for Dragon Slayers is a deeply satisfying coming-of-age tale wrapped in a magical adventure story.

Merrie Haskell was born in Michigan and grew up in North Carolina. She wrote her first story at the age of seven, and she walked dogs after school in order to buy her first typewriter.

Merrie returned north to attend the Residential College of the University of Michigan, where she earned a BA in biological anthropology. Her fiction has appeared in Nature, Asimov's Science Fiction, Strange Horizons, and Unplugged: The Web's Best Sci-Fi and Fantasy: 2008 Download. She now lives in Saline, Michigan, with her husband and stepdaughter. Merrie works in a library with over seven million books, and she finds this to be just about the right number. She is also the author of The Princess Curse and Handbook for Dragon Slayers.

A haphazard, almost accidental progression of episodes builds smoothly to a lively and cohesive plot arc that will keep readers enthralled.
— The Horn Book

Tilda is an extremely likable heroine....Kids with their own physical anomalies may particularly respond to Tilda’s adventures, as will fans of the movie Brave or the How to Train Your Dragon book or movie.
— Bulletin of the Center for Children’s Books

This accessible medieval fantasy features three likable young people, several imaginatively depicted magical animals, and a couple of dastardly villains. As in Haskell’s The Princess Curse (2011), elements from European fairy tales inspire parts of the plot. This engaging fantasy traces the adventures of a bookish but brave heroine.
— Booklist