The Child Thief: A Novel (Paperback) 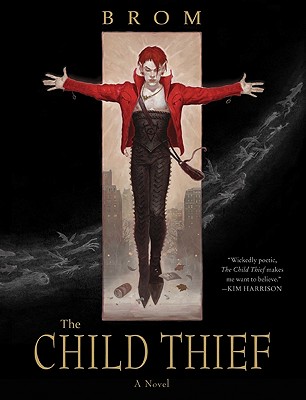 A deliciously dark retelling of Peter Pan filled with fantastic illustrations from the author. In Child Thief, Peter moves between the world of Faerie and our own, convincing teenage boys to join him a magical land where time stands still. But Neverland is no longer the paradise it used to be...

“So, if Tim Burton, Wes Craven, and Marilyn Manson got together and re-imagined Peter Pan, this is the story they would tell. Brom?s vision of the dark side of Peter's Neverland is fantastic!”
— Bob Brill, Horizon Books, Petoskey, MI

The acclaimed artist Brom brilliantly displays his multiple extraordinary talents in The Child Thief—a spellbinding re-imagining of the beloved Peter Pan story that carries readers through the perilous mist separating our world from the realm of Faerie. As Gregory Maguire did with his New York Times bestselling Wicked novels, Brom takes a classic children’s tale and turns it inside-out, painting a Neverland that, like Maguire’s Oz, is darker, richer, more complex than innocent world J.M. Barrie originally conceived. An ingeniously executed literary feat, illustrated with Brom’s sumptuous artwork, The Child Thief is contemporary fantasy at its finest—casting Peter Pan, the Lost Boys, even Captain Hook and his crew in a breathtaking new light.

Over the past few decades, Brom has lent his distinctive vision to all facets of the creative industries, from novels and games to comics and film. He is the author of The Child Thief and the award-winning illustrated horror novels The Plucker and The Devil's Rose. Brom is currently kept in a dank cellar somewhere just outside of Seattle.

“Brom has always been an artist who gave us his nightmares fully realized, but with THE CHILD THIEF, he paints in words. A wonderfully nasty Peter Pan reboot that stands on its own as a dark, twisted adventure.” — Christopher Golden

” [A] fascinating work of dark epic fantasy that blends elements of the Peter Pan story with characters from Celtic and Norse mythologies.” — Tulsa World