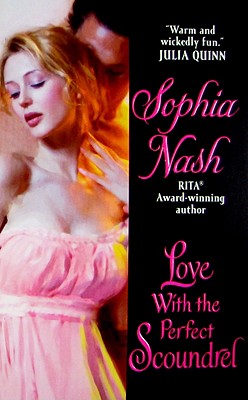 This is book number 3 in the Widows Club series.

Only a man with a mysterious past could tempt the Countess from the Isle of Ice . . .

Twice jilted, Grace Sheffey has given up on love. No longer capable of maintaining her elegant facade with her intimate circle of friends, she has little choice but to flee . . . right into the teeth of a blizzard. But when her wretched carriage ride ends in disaster, a rugged, imposing stranger is waiting to save her life . . . and her heart.

Michael Ranier is a man of many secrets—secrets that could place the countess in terrible danger. But concealed in the wilds of Yorkshire, he can't help but unleash her hidden reserves of desire and fortitude—and challenge her to blossom into the woman she was destined to become . . . a lady willing to sacrifice all to find love with the perfect scoundrel.

Sophia Nash was born in Switzerland and raised in France and the United States, but says her heart resides in Regency England. Her ancestor, an infamous French admiral who traded epic cannon fire with the British Royal Navy, is surely turning in his grave.

Before pursuing her long-held dream of writing, Sophia was an award-winning television producer for a CBS affiliate, a congressional speechwriter, and a nonprofit CEO. She lives in the Washington, D.C., suburbs with her husband and two children.

Sophia's novels have won twelve national awards, including the prestigious RITA® Award, and two spots on Booklist's "Top Ten Romances of the Year."