A Sound of Thunder and Other Stories (Paperback) 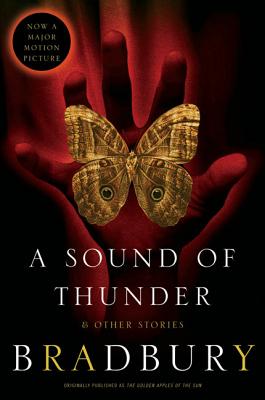 With his disarmingly simple style and complex imagination, Ray Bradbury has seized the minds of American readers for decades.This collection showcases thirty-two of Bradbury's most famous tales in which he lays bare the depths of the human soul. The thrilling title story, A Sound of Thunder, tells of a hunter sent on safari -- sixty million years in the past. But all it takes is one wrong step in the prehistoric jungle to stamp out the life of a delicate and harmless butterfly -- and possibly something else much closer to home ...

In a career spanning more than seventy years, Ray Bradbury inspired generations of readers to dream, think, and create. A prolific author of hundreds of short stories and close to fifty books, as well as numerous poems, essays, operas, plays, and screenplays, Bradbury was one of the most celebrated writers of our time. His groundbreaking works include Fahrenheit 451, The Martian Chronicles, The Illustrated Man, Dandelion Wine, and Something Wicked This Way Comes. An Emmy Award winner for his teleplay The Halloween Tree and an Academy Award nominee, he was the recipient of the 2000 National Book Foundation Medal for Distinguished Contribution to American Letters, the 2004 National Medal of Arts, and the 2007 Pulitzer Prize Special Citation, among many honors.