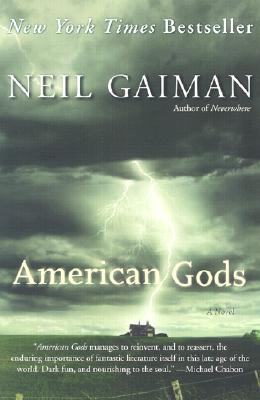 Shadow has just gotten out of prison and has nothing to lose. After entering the employ of an unscrupulous man named Mr. Wednesday, Shadow meets various incarnations of "gods" who have immigrated to America via their followers and assists his new boss in rallying their support for an impending war against the new gods of suburban malaise and consumerism. Like Shadow, this war is not everything it seems, and Gaiman executes his tale with beautiful detail and plotting. Urban fantasy at its finest, American Gods is quintessential for fans of the genre. Recommended for adults.

Released from prison, Shadow finds his world turned upside down. His wife has been killed; a mysterious stranger offers him a job. But Mr. Wednesday, who knows more about Shadow than is possible, warns that a storm is coming -- a battle for the very soul of America . . . and they are in its direct path.

One of the most talked-about books of the new millennium, American Gods is a kaleidoscopic journey deep into myth and across an American landscape at once eerily familiar and utterly alien. It is, quite simply, a contemporary masterpiece.

“Original, engrossing, and endlessly inventive; a picaresque journey across America where the travelers are even stranger than the roadside attractions.”
-George R. R. Martin

"American Gods is like a fast run downhill through a maze -- both exhilarating and twisted."
-Jane Lindskold, author of Changer and