The Devil's Due (a Sherlock Holmes Adventure) (Hardcover) 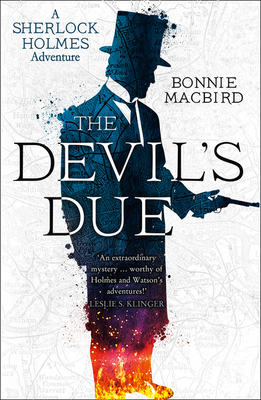 After Art in the Blood and Unquiet Spirits, Holmes and Watson are back in the third of Bonnie MacBird's critically acclaimed Sherlock Holmes Adventures, written in the tradition of Conan Doyle himself.

It's 1890 and the newly famous Sherlock Holmes faces his worst adversary to date - a diabolical villain bent on destroying some of London's most admired public figures in particularly gruesome ways. A further puzzle is that suicide closely attends each of the murders. As he tracks the killer through vast and seething London, Holmes finds himself battling both an envious Scotland Yard and a critical press as he follows a complex trail from performers to princes, anarchists to aesthetes. But when his brother Mycroft disappears, apparently the victim of murder, even those loyal to Holmes begin to wonder how close to the flames he has travelled. Has Sherlock Holmes himself made a deal with the devil?

Bonnie MacBird was born and raised in San Francisco and fell in love with Sherlock Holmes by reading the canon at age ten. She attended Stanford University, earning a BA in Music and an MA in Film. Her long Hollywood career includes feature film development exec at Universal, the original screenplay for the movie TRON, three Emmy Awards for documentary writing and producing, numerous produced plays and musicals, and theatre credits as an actor and director. In addition to her work in entertainment, Bonnie teaches a popular screenwriting class at UCLA Extension, as well as being an accomplished water-colourist. She is a regular speaker on writing, creativity, and Sherlock Holmes. She lives in Los Angeles, with frequent trips to London.