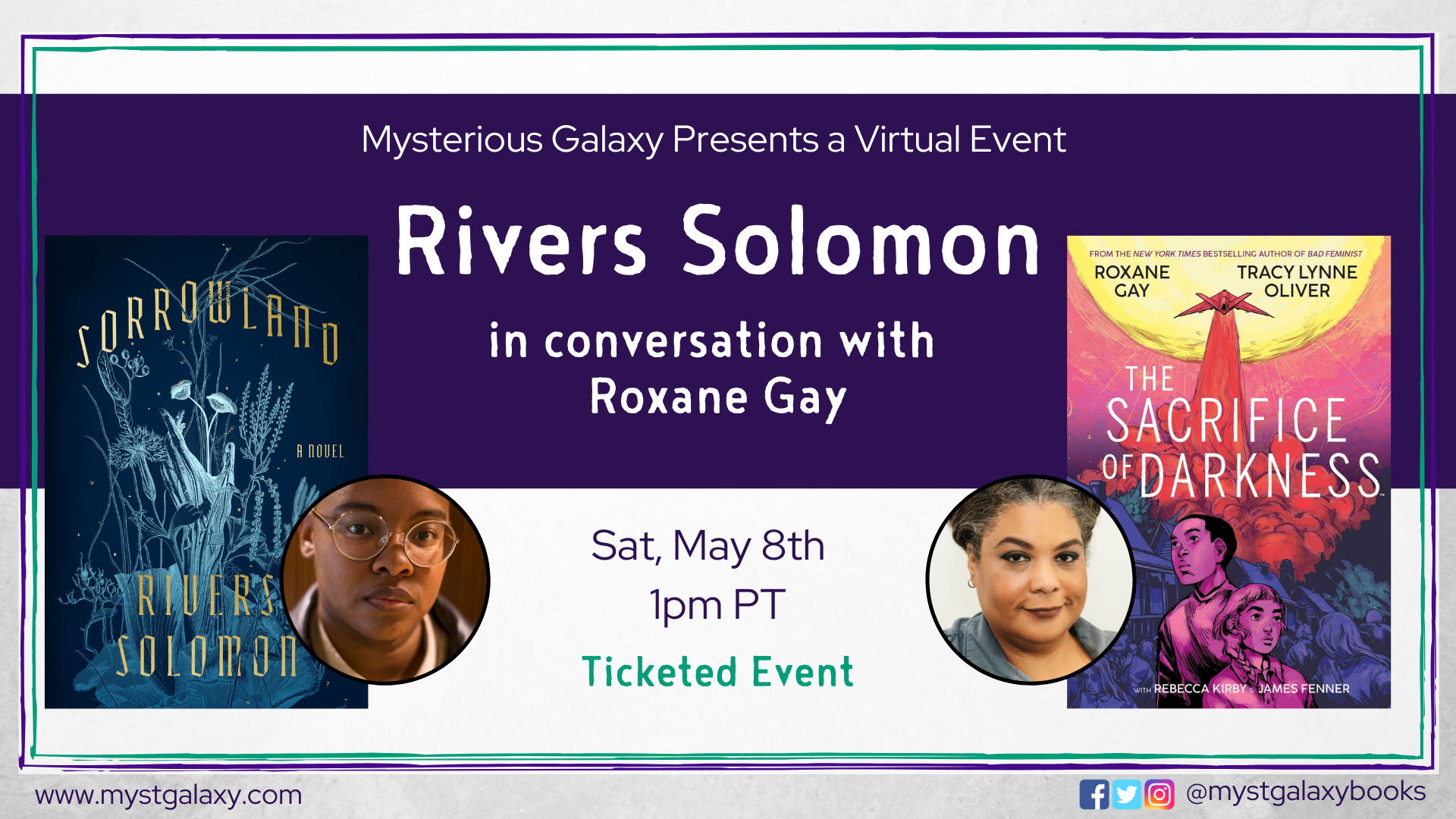 Event date:
Saturday, May 8, 2021 - 1:00pm
TICKETED EVENT!
Your Purchase of a ticket bundle includes:
Accessibility:
Real-time captioning for all Crowdcast events is available via Google Chrome. For enabling captions, please follow this guide. More info here.
Join Rivers Solomon in celebration of their new book, Sorrowland, in conversation with Roxane Gay.
A triumphant, genre-bending breakout from one of the boldest new voices in contemporary fiction, in Sorrowland monsters aren't just individuals, but entire nations. It is a searing, seminal book that marks the arrival of an unignorable voice in American fiction. Join us and other indie bookstores across the country for this exciting conversation
On Sorrowland
Vern—seven months pregnant and desperate to escape the strict religious compound where she was raised—flees for the shelter of the woods. There, she gives birth to twins, and plans to raise them far from the influence of the outside world. But even in the forest, Vern is a hunted woman. Forced to fight back against the community that refuses to let her go, she unleashes incredible brutality far beyond what a person should be capable of, her body wracked by inexplicable and uncanny changes. To understand her metamorphosis and to protect her small family, Vern has to face the past, and more troublingly, the future—outside the woods. Finding the truth will mean uncovering the secrets of the compound she fled but also the violent history in America that produced it.
“A fantastical, fierce reckoning . . . Sorrowland is gorgeous and the writing, the storytelling, they are magnificent. This country has a dark history of what it’s willing to do to black bodies and Rivers Solomon lays that truth bare in a most unexpected, absolutely brilliant way.”
—Roxane Gay, author of Hunger
About the Authors
Rivers Solomon writes about life in the margins, where they are much at home. In addition to appearing on the Stonewall Honor List and winning a Firecracker Award, Solomon's debut novel An Unkindness of Ghosts was a finalist for a Lambda, a Hurston/Wright, an Otherwise (formerly Tiptree) and a Locus award. Solomon's second book, The Deep, based on the Hugo-nominated song by Daveed Diggs-fronted hip-hop group clipping, was the winner of the 2020 Lambda Award and shortlisted for a Nebula, Locus, Hugo, Ignyte, Brooklyn Library Literary, British Fantasy, and World Fantasy award. Solomon's short work appears in or is forthcoming from Black Warrior Review, The New York Times, The New York Times Magazine, Guernica, Best American Short Stories, Tor.com, Best American Horror and Dark Fantasy, and elsewhere. A refugee of the Trans Atlantic Slave Trade, Solomon was born on Turtle Island but currently resides on an isle in an archipelago off the western coast of the Eurasian continent.
Roxane Gay’s writing appears in Best American Mystery Stories 2014, Best American Short Stories 2012, Best Sex Writing 2012, A Public Space, McSweeney’s, Tin House, Oxford American, American Short Fiction, Virginia Quarterly Review, and many others. She is a contributing opinion writer for the New York Times. She is the author of the books Ayiti, An Untamed State, the New York Times bestselling Bad Feminist, the nationally bestselling Difficult Women and the New York Times bestselling Hunger. She is also the author of World of Wakanda for Marvel. She has several books forthcoming and is also at work on television and film projects. She also has a newsletter, The Audacity.

An Unkindness of Ghosts (Paperback)

The Sacrifice of Darkness (Hardcover)

How to Be Heard (Hardcover)

Not That Bad: Dispatches from Rape Culture (Paperback)