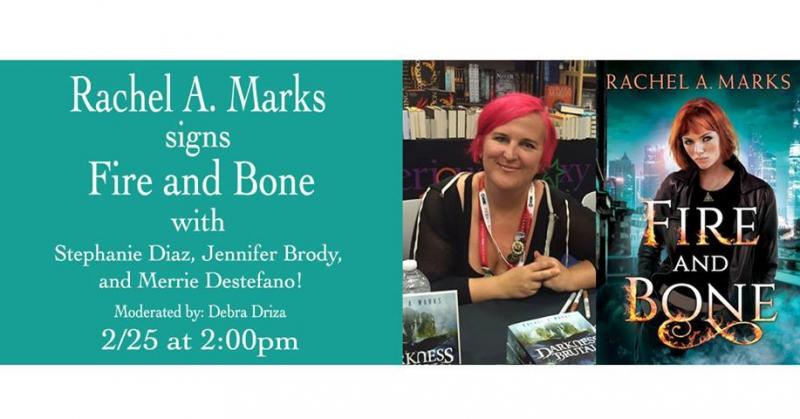 Author and artist Rachel A. Marks' bio reads: "I'm an author and professional artist, cancer survivor, mother of four, and wife to the most amazing man in the world.​ In my free time I'm a beach bum and entertainment cheese junkie. If you don't like Superman I may wonder about you and suggest you seek professional help," which pretty much immediately identifies her as a member of our Galaxy. Fire and Bone is the first in her new young adult series, Otherborn.
“THIS BOOK IS SO GOOD. Ahem. Seriously, this is a fantastic, immediately-engaging YA urban fantasy. Marks mashes together Irish mythology and Southern California in the brilliant start to this new series. Fire and Bone hooked me from page one, and the last page left me desperate for more.” —Beth Cato, Nebula-nominated author of The Clockwork Dagger and Breath of Earth

In Hollywood's underworld of demigods, druids, and ancient bonds, one girl has a dangerous future.

Sage is eighteen, down on her luck, and struggling to survive on the streets of Los Angeles. Everything changes the night she's invited to a party--one that turns out to be a trap.

Thrust into a magical world hidden within the City of Angels, Sage discovers that she's the daughter of a Celtic goddess, with powers that are only in their infancy. Now that she is of age, she's asked to pledge her service to one of the five deities, all keen on winning her favor by any means possible. She has to admit that she's tempted--especially when this new life comes with spells, Hollywood glam, and a bodyguard with secrets of his own. Not to mention a prince whose proposal could boost her rank in the Otherworld.

As loyalties shift, and as the two men vie for her attention, Sage tries to figure out whom to trust in a realm she doesn't understand. One thing is for sure: the trap she's in has bigger claws than she thought. And it's going to take a lot more than magic for this Celtic demigoddess to make it out alive.

Clementine's world is on the brink of destruction. An army of aliens from the distant planet Marden has arrived with a massive fleet of battleships, intent on finally putting an end to the war Kiel's old rulers initiated. With the Alliance headquarters reduced to rubble and one of the rebel leaders close to death, Clementine and her friends have no choice but to retreat to the Core to escape the alien ships attacking the Surface.

But safety in the Core means forming a temporary alliance with their sworn enemy, Commander Charlie. He's a ruthless man and a liar, but striking a bargain with him--his pardon in exchange for their help defeating the Mardenites--is the only way the rebels might survive the war. And Charlie needs their help too, for Marden's force is more powerful than anyone anticipated, with weapons and technologies never before seen on Kiel. Unless old feuds can be set aside long enough for a diplomatic solution to be found, all of Kiel's people will be destroyed, and everything Clementine and her friends have sacrificed in their fight for peace will have been for nothing.

In the epic conclusion to the award-winning Continuum Trilogy, Aero leads a group insurgents from the Second Continuum to overthrow his rival, Supreme General Vinick, and unite his space colony's military forces while Seeker embarks on a secret mission back to her home colony to reinforce Earth's defenses and protect the First Continuum against an even greater threat. Meanwhile, Myra's nightmares have become a reality as the Dark Thing hurtles toward Earth with designs on eradicating the planet's fledgling populace. The only thing standing in the way are the three Carriers and those who would join them to fight against a second coming of the Doom.

"Mila has been running for her life for so long. But there might be nowhere left for her to go. Having discovered she's a danger to herself and anyone who dares get close to her, Mila goes into hiding with friend and tech-expert Lucas. She just can't risk causing any more pain. Nothing can undo the way she hurt Hunter: the boy she'll always love, the boy who might never forgive her for what she's done. But when Mila discovers that her enemy General Holland is an even bigger threat to humanity than she is, she must make a choice: either push aside her fears and fight him with everything she's got ... or turn her back on the world forever."