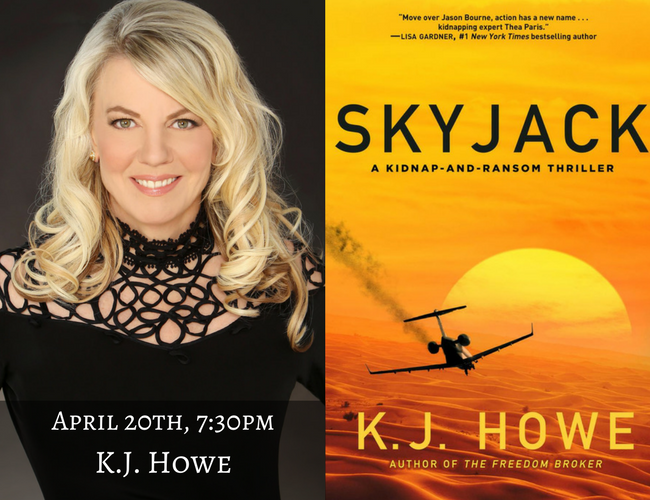 Canadian thriller writer KJ Howe is an adventurer who enjoyed a nomadic lifestyle in her early years and can be found doing anything from playing tennis to studying modern combat in the Arizona desert. She will be at the Galaxy for her newest novel Skyjack, a kidnap and ransom thriller the author poured countless hours of thorough research into to realistically bring to life.

James Rollins, NYT Bestselling Author describes Skyjack as “a rip-roaring adventure from first page to last. The novel's thrilling blend of scientific plausibility, riveting spycraft, and ripped-from-the-headlines authenticity left me in awe. And the hero of this nail-biter, Thea Paris, is a Swiss Army knife of ingenuity, smarts, and skills. I want her to be my new best friend, or at least, to be there if I’m ever in harm’s way. I can’t wait to see what trouble she gets into next!”

Immersive action scenes and nuanced understandings of persuasion, power, and manipulation inform the second novel featuring kidnap and rescue expert Thea Paris and her allies, adversaries, and family members (some of whom fall into more than one camp). From its nausea-inducing opening scene of a skyjacked plane being forced to land in the Libyan Desert to its explosive dramatic multi-agenda actors finale, Skyjack never loses sight of the very human motivations and foibles of its protagonists and antagonists. My favorite new thriller series. – Maryelizabeth

There are twenty-five elite kidnap and ransom (K&R) specialists in the world. Only one is a woman: Thea Paris. And she's the best in the business.

Twenty years ago, a terrified young boy was abducted in the middle of the night by masked intruders while his sister watched, paralyzed with fear. Returned after a harrowing nine months with his captors, Thea's brother has never been the same.

This life-shattering experience drove Thea to become what she is today: a world-class freedom broker. Most hostage-recovery work is done at the negotiation table, but when diplomacy fails, Thea leads Quantum Security International's black-ops team on highly sensitive rescue missions to political hot spots around the globe.

Her childhood nightmare resurfaces when her oil magnate father, Christos Paris, is snatched from his yacht off Santorini on his sixtieth birthday, days away from the biggest deal of his career. The brutal kidnappers left the entire crew slaughtered in their wake, but strangely, there are no ransom demands, no political appeals, no prisoner release requests-just obscure and foreboding texts written in Latin sent from burner phones.

Knowing the survival window for kidnap victims is small, Thea throws herself into the most urgent and challenging rescue mission of her life-but will she be able to prevent this kidnapping from destroying her family for good?