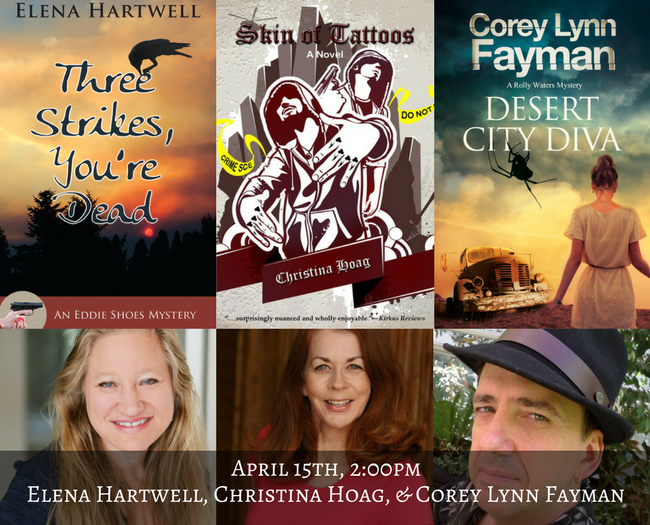 Elena Hartwell notes of her Private Investigator Edwina “Eddie Shoes” Schultz series, "each novel has its own mystery, allowing for readers to start with any book in the series. I work hard to create a stand alone book, though I hope it piques your interest to read the entire series. Each time you read a new Eddie Shoes story, there's a new victim, perpetrator, and crime to solve. The characters grow and change throughout the arc of the series, however, adding to the larger picture. While each novel has characters specific to that particular mystery, many characters reappear in other books." The numerically titled books also contain elements of suspense and romance; her most recent is Three Strikes, You're Dead.

Elena will be discussing the mysteries of writing with fellow novelists Christina Hoag, whose Skin of Tattoos is set in a world seeded with deceit and betrayal, where the only escape from rules that carry a heavy price for transgression is sacrifice; and Corey Lynn Fayman, whose unorthodox Rolly Waters noir novel, Desert City Diva, received a Bronze Award in the 2015 INDIEFAB Book of the Year Awards. The Indiefab awards are judged by a select group of librarians and booksellers from around the country and honor the very best of indie publishing each year.

Private investigator Eddie Shoes heads to a resort outside Leavenworth, Washington, for a mother-daughter getaway weekend. Eddie's mother Chava wants to celebrate her new job at a casino by footing the bill for the two of them, and who is Eddie to say no?

On the first morning, Eddie goes on an easy solo hike, and a few hours later, stumbles upon a makeshift campsite and a gravely injured man. A forest fire breaks out and she struggles to save him before the flames overcome them both. Before succumbing to his injuries, the man hands her a valuable rosary. He tells her his daughter is missing and begs for her help. Is Eddie now working for a dead man?

Barely escaping the fire, Eddie wakes in the hospital to find both her parents have arrived on the scene. Will Eddie's card-counting mother and mob-connected father help or hinder the investigation? The police search in vain for a body. How will Eddie find the missing girl with only Eddie's memory of the man's face and a photo of his daughter to go on?

Book 3 in the Eddie Shoes Mystery Series, which began with One Dead, Two to Go.

Two Heads Are Deader Than One (Eddie Shoes Mystery #2) (Paperback)

Private Investigator Eddie Shoes is enjoying a rare period of calm. She's less lonely now that Chava, her card-counting mom from Vegas, is sharing her home. She also has a new companion, Franklin, a giant dog of curious ancestry.

Hoping for a lucrative new case, Eddie instead finds herself taking on a less promising client: her best friend from her childhood in Spokane. Dakota has turned up in Bellingham in jail, where she is being held on a weapons charge. Eddie reluctantly agrees not only to lend her friend money for bail but to also investigate who is stalking her. Soon after Dakota is freed, she disappears again, leaving Eddie to answer to the local cops, including her ex-boyfriend Chance Parker. Has Dakota been kidnapped? If not, why did she jump bail? What are Eddie's business cards doing on the bodies of two murder victims?

The key to these mysteries lies in Dakota and Eddie's shared history, which ended when Eddie left home after high school. As a person of interest in both murder cases, Eddie is forced to go in search of the truth, digging into the past and facing her own demons.

Private Investigator Edwina "Eddie Shoes" Schultz's most recent job has her parked outside a seedy Bellingham hotel, photographing her quarry as he kisses his mistress goodbye. This is the last anyone will see of the woman... alive. Her body is later found dumped in an abandoned building. Eddie's client, Kendra Hallings, disappears soon after. Eddie hates to be stiffed for her fee, but she has to wonder if Kendra could be in trouble too. Or is she the killer? Eddie usually balks at matters requiring a gun, but before she knows it, she is knee-deep in dangerous company, spurred on by her card-counting adrenaline-junkie mother who has shown up on her doorstep fresh from the shenanigans that got her kicked out of Vegas. Chava is only sixteen years older than Eddie and sadly lacking in parenting skills. Her unique areas of expertise, however, prove to be helpful in ways Eddie can't deny, making it hard to stop Chava from tagging along. Also investigating the homicide is Detective Chance Parker, new to Bellingham's Major Crimes unit but no stranger to Eddie. Their history as a couple back in Seattle is one more kink in a chain of complications, making Eddie's case more frustrating and perilous with each tick of the clock. Book 1 in the Eddie Shoes Mystery series.

When Cyco Lokos gang member Magdaleno (Mags) Argueta comes home to Los Angeles after serving prison time for a robbery, he wants nothing more than to start a new life. However, there's one obstacle he has to overcome first...his old life. Mags tries to let go of his bitterness-he was framed by Rico, the new leader of the Cyco Lokos-and stay out of gang life for the sake of his Salvadoran immigrant family and his girlfriend Paloma, but trying to integrate into society after a stint in prison doesn't come easily. Faced with low job prospects and Rico's demands to help the Cyco Lokos make money, a broke and disillusioned Mags makes the only choice he can. However, Mags soon discovers that loyalties have shifted, including his, and being a part of the Cyco Lokos with Rico in charge is far more dangerous and uncertain that it used to be. With his sister pregnant by a rival gang member and his own relationship with Paloma, his best friend's sister, a violation of gang code, Mags becomes caught in a web of secrets, revenge, lies, and murder that might ultimately cost him everything.

Rolly Waters has many reasons to regret going out for Mexican food at 2.30 in the morning. Not least because then he would never have met dance-club DJ Macy Starr - possibly the most infuriatingly unpredictable and secretive client he has ever taken on.

Macy Starr wants Rolly to find out what happened to the young woman she knew as Aunt Betty, the woman who rescued her as a child and who then disappeared without trace. The only clue she has to go on is a curious one-stringed guitar.

Rolly's investigation leads to a weird world of alien-obsessed cults, a strange desert hideaway known as Slab City - and to a 20-year-old unsolved murder case. But how can he solve the mystery if he can't even trust his own client?