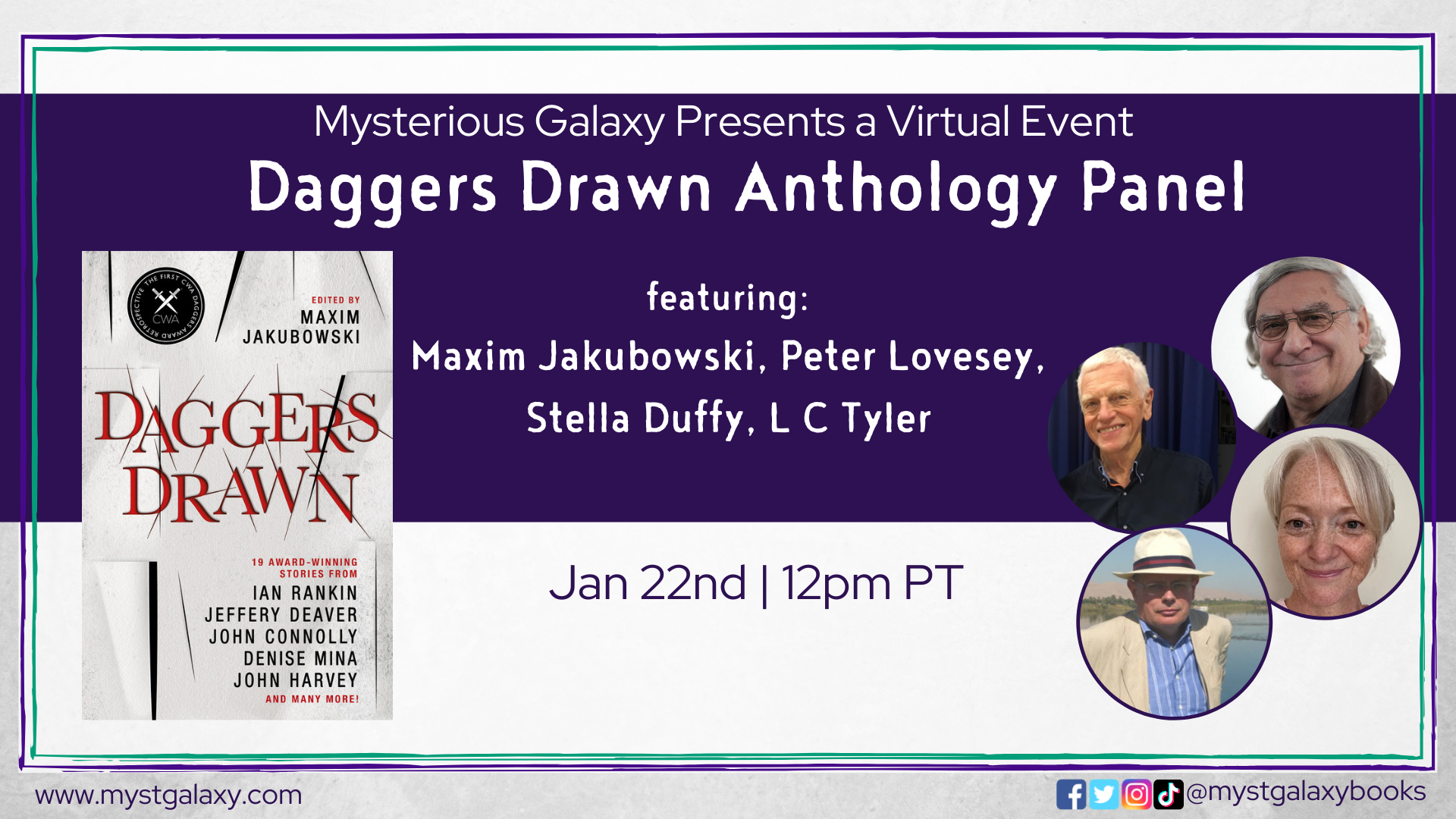 Event date:
Saturday, January 22, 2022 - 12:00pm
Mysterious Galaxy's virtual events are hosted on Crowdcast. Click here to register for the event and here to view our virtual code of conduct. Accessibility: Real-time captioning for all Crowdcast events is available via Google Chrome. For enabling captions, please follow this guide. More info here.
About the Panelists

MAXIM JAKUBOWSKI is a London-based former publisher, editor, writer and translator. He has compiled over one hundred anthologies in a variety of genres, many of which have garnered awards. He is a past winner of the Karel and Anthony awards, and in 2019 was given the prestigious Red Herrings award by the Crime Writers' Association for his contribution to the genre. He broadcasts regularly on radio and TV, reviews for diverse newspapers and magazines, and has been a judge for several literary awards. He is the author of twenty novels, including THE LOUISIANA REPUBLIC (2018), his latest THE PIPER'S DANCE (2021)and a series of SUNDAY TIMES bestselling novels under a pseudonym. He has also published five collections of his own short stories. He is currently Chair of the Crime Writers' Association.

PETER LOVESEY - After a career in further education, Peter Lovesey became a full-time author and began his writing career with Wobble to Death in 1970, introducing Sergeant Cribb, the Victorian detective, who went on to feature in seven more books and two television series. His recent novels have alternated between two contrasting detectives: Peter Diamond, and the Victorian sleuth, Bertie. He was Chairman of the Crime Writers Association in 1991-2. He now lives near Chichester. Lovesey's mysteries and short stories have won him awards all over the world. He won the CWA Gold Dagger in 1982 and has won the CWA Silver Dagger three times. He is the winner of the 2000 CWA Cartier Diamond Dagger Award. In France he has been awarded the Grand Prix de littérature Policiére and the Prix du Roman d'Adventures and in the USA he has received the Anthony Award, McAvity Award, Ellery Queen Readers' Award and the Mystery Writers of America Golden Mysteries Short Story Prize.

STELLA DUFFY is an award-winning writer of seventeen novels, over seventy short stories and fourteen plays. She worked in theatre for over thirty-five years as an actor, director and facilitator. She is the co-founder and until January 2021 was co-director of the Fun Palaces campaign supporting community-led connection, with over 650,000 local participants across the UK, among them some of the least privileged communities. She received the OBE for Services to the Arts in 2016. Stella is also a yoga teacher and has just completed the second year of a doctorate training in Existential Psychotherapy, her research is in the embodied experience of postmenopause. Alongside her research, she works at an NHS cancer support service, a hospice bereavement support and in a general mental health service.She has won the CWA Short Story Dagger twice.


L C (Len) TYLER is a former cultural attaché and chief executive of a medical royal college. He writes two crime series: the Herring Mysteries and a historical series featuring seventeenth century lawyer and spy, John Grey. He has had short stories published in a number of magazines and anthologies. He has won the Goldsboro Last Laugh Award (twice), the Ian St James Awards and the 2017 CWA Short Story Dagger. Len has also been twice nominated for an Edgar Allan Poe award in the US. He has lived and worked all over the world but has more recently been based in London and West Sussex.