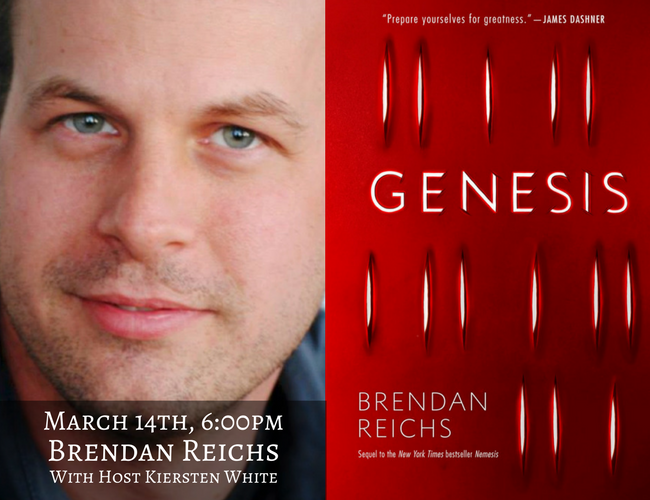 When Brendan Reichs made the career jump from litigation attorney to young adult author, he never looked back and had no regrets. He is the co-writer of the Virals, a series about teenagers infected with a strain of canine parvovirus who solve mysteries ranging from cold cases to hidden pirate treasure. Brendan’s new series begins with Nemesis which has been described as “Orphan Black meets Lord of the Flies” and focuses on a protagonist who is killed on her birthday every two years to only wake up the next day. Genesis, the second in series, hits shelves this March, and Brendan will be here March 14th for a book signing! Author of The Maze Runner James Dashner has some simple advice about this series that we love. “Prepare yourselves for greatness.” Joining us as guest host will be store friend and New York Times Best Selling author Kiersten White. Kiersten has written a great range of books, her most recent being The Conqueror’s Saga.

Noah Livingston knows he is destined to survive.

The 64 members of Fire Lake's sophomore class are trapped in a place where morals have no meaning and zero rules apply. But Noah's deaths have trained him-hardened him-to lead the strongest into the future ... whatever that may be. And at any cost.

In a violent world where brute force passes for leadership, it's tempting to lay back and let everyone else battle it out. But Min's instincts rebel against allowing others to decide who lives and who dies. She's ready to fight for what she believes in. And against whomever might stand in her way.

It's been happening since Min was eight. Every two years, on her birthday, a strange man finds her and murders her in cold blood. But hours later, she wakes up in a clearing just outside her tiny Idaho hometown--alone, unhurt, and with all evidence of the horrifying crime erased.

Across the valley, Noah just wants to be like everyone else. But he's not. Nightmares of murder and death plague him, though he does his best to hide the signs. But when the world around him begins to spiral toward panic and destruction, Noah discovers that people have been lying to him his whole life. Everything changes in an eye blink.

And I Darken (Paperback)

This vividly rendered novel reads like HBO's Game of Thrones . . . if it were set in the Ottoman Empire. Ambitious in scope and intimate in execution, the story's atmospheric setting is rife with political intrigue, with a deftly plotted narrative driven by fiercely passionate characters and a fearsome heroine. Fans of Victoria Aveyard's THE RED QUEEN and Sabaa Tahir's AN EMBER IN THE ASHES won't want to miss this visceral, immersive, and mesmerizing novel, the first in the And I Darken series.

Lada despises the Ottomans and bides her time, planning her vengeance for the day when she can return to Wallachia and claim her birthright. Radu longs only for a place where he feels safe. And when they meet Mehmed, the defiant and lonely son of the sultan, who's expected to rule a nation, Radu feels that he's made a true friend--and Lada wonders if she's finally found someone worthy of her passion.

But Mehmed is heir to the very empire that Lada has sworn to fight against--and that Radu now considers home. Together, Lada, Radu, and Mehmed form a toxic triangle that strains the bonds of love and loyalty to the breaking point.

"A dark and twisty fantasy . . . think Game of Thrones, but with teens."--Seventeen

"Will completely spin you into another time and place."--Bustle