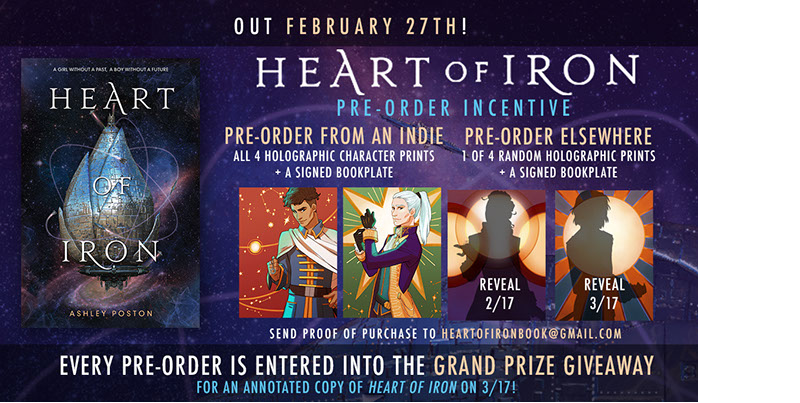 Ashley Poston is a girl after our own heart. She loves the Dread Pirate Roberts, all things fantasy, cats, anime, and the next adventure waiting around the corner to be discovered. She is the author of Geekerella, The Sound of Us, We Own the Night, and Heart of Iron, her newest novel, which she will be signing on March 8th! Heart of Iron has been described as “An action-packed tale full of romance, royalty, and adventure, inspired by the story of Anastasia. Perfect for fans of Six of Crows, Cinder, and the cult classic television show Firefly” and it has already become a staff favorite in our store. If you pre-order the book from us you can also get 4 holographic character prints and a signed book plate; just send you proof of purchase to HEARTOFIRONBOOK (at) gmail (dot) com. Joining us as guest host will be store friend and New York Times Best Selling author Kiersten White. Kiersten has written a great range of books, her most recent being The Conqueror’s Saga.

An action-packed tale full of romance, royalty, and adventure, inspired by the story of Anastasia. Perfect for fans of Six of Crows, Cinder, and the cult classic television show Firefly.

Seventeen-year-old Ana is a scoundrel by nurture and an outlaw by nature. Found as a child drifting through space with a sentient android called D09, Ana was saved by a fearsome space captain and the grizzled crew she now calls family. But D09--one of the last remaining illegal Metals--has been glitching, and Ana will stop at nothing to find a way to fix him.

Ana's desperate effort to save D09 leads her on a quest to steal the coordinates to a lost ship that could offer all the answers. But at the last moment, a spoiled Ironblood boy beats Ana to her prize. He has his own reasons for taking the coordinates, and he doesn't care what he'll sacrifice to keep them.

When everything goes wrong, she and the Ironblood end up as fugitives on the run. Now their entire kingdom is after them--and the coordinates--and not everyone wants them captured alive.

What they find in a lost corner of the universe will change all their lives--and unearth dangerous secrets. But when a darkness from Ana's past returns, she must face an impossible choice: does she protect a kingdom that wants her dead or save the Metal boy she loves?

Geekerella: A Fangirl Fairy Tale (Once Upon A Con #1) (Hardcover)

Cinderella goes to the con in this fandom-fueled twist on the classic fairy tale.

Part romance, part love letter to nerd culture, and all totally adorbs, Geekerella is a fairy tale for anyone who believes in the magic of fandom. Geek girl Elle Wittimer lives and breathes Starfield, the classic sci-fi series she grew up watching with her late father. So when she sees a cosplay contest for a new Starfield movie, she has to enter. The prize? An invitation to the ExcelsiCon Cosplay Ball, and a meet-and-greet with the actor slated to play Federation Prince Carmindor in the reboot. With savings from her gig at the Magic Pumpkin food truck (and her dad's old costume), Elle's determined to win...unless her stepsisters get there first.

Teen actor Darien Freeman used to live for cons--before he was famous. Now they're nothing but autographs and awkward meet-and-greets. Playing Carmindor is all he's ever wanted, but the Starfield fandom has written him off as just another dumb heartthrob. As ExcelsiCon draws near, Darien feels more and more like a fake--until he meets a girl who shows him otherwise.

A SISTER FILLED WITH RAGE
Lada Dracul has no allies. No crown. All she has is what she's always had: herself. After failing to secure the Wallachian throne, Lada is out to punish anyone who dares cross her. She storms the countryside with her men, but brute force isn't getting Lada what she wants. And thinking of Mehmed, the defiant Ottoman sultan, brings little comfort to her thorny heart. There's no time to wonder whether he still thinks about her, even loves her. She left him before he could leave her.

HER BROTHER CAUGHT IN THE CROSSHAIRS
Lada needs the support of her diplomatic younger brother, Radu. But Mehmed has sent him to Constantinople--and it's no diplomatic mission. Mehmed wants control of the city, and Radu has earned an unwanted place as a double-crossing spy behind enemy lines. And for the first time in his life, when Lada asks him for help, he refuses . . . leading his sister to make the darkest of choices.

THE ULTIMATE POWER PLAY
Torn between loyalties to faith, to the Ottomans, and to Mehmed, Radu knows he owes Lada nothing. If she dies, he could never forgive himself--but if he fails in Constantinople, would Mehmed ever forgive him?

As nations fall around them, the Dracul siblings must decide: what will they sacrifice to fulfill their destinies? Empires will topple, thrones will be won . . . and souls will be lost.